For the unicorn head I made the basic structure out of very thin cardboard. I then used slightly thicker cardboard to make the structure for the neck of the unicorn. I covered the neck with strips of white fun foam to give it the robot type look and then cut out a piece of fun foam for each side of the face and for the top of the head.

I made the unicorn horn by wrapping strips of fun foam around some tin foil that I had formed into a cone shape around a pipe cleaner. I then cut out a hole in the middle of the head and put the horn in it, sticking out at a slight angle. I cut the ears out of fun foam and cut out two almond shapes for the eyes. I wanted to make the eyes light up like the robot unicorn in the game so I took two halves of old giant kinder surprise capsules and cut holes in the bottom of both. I stuck tiny ‘finger laser’ lights in the holes and covered the other sides of the capsules with parchment paper to dull the light a bit so that it wouldn’t be so intense. I hot glued the eye lights on the inside of the head over the eye holes.

I used some light purple paint to add the final ‘unicorn touches’ to the head and I cut out a bunch of flowing unicorn mane shapes from white fun foam, glued them together and painted it rainbow colors. I then attached the mane to the rest of the head with hot glue. The head turned out to be sort of like a helmet, but it was very light because of the thin cardboard and fun foam. I also taped an old pair of headphones to the inside of the helmet so that I could plug them into my ipod and play the song from the game (‘Always’ by Erasure) while I wore the homemade Robot Unicorn Attack Halloween costume.

For the body I glued a bunch of bigger pieces of fun foam together to form a sort of vest. I attached strips of fun foam to each side and to one of the shoulders with Velcro strips so that I would be able to easily put the vest on or take it off. As with the head, I used light purple paint to highlight the robot-ness of the unicorn. I cut a tail shape out of another sheet of fun foam and painted it rainbow colors to match the mane and then attached it with Velcro to the back of the vest so that it could be easily taken off if needed.

To complete the homemade Robot Unicorn Attack Halloween costume I wore a long sleeved white shirt, some white jeans and white shoes. The costume turned out great, and I won the costume contest at work for the second year in a row! People were impressed with the light up eyes and the speakers that played the song from the game. The costume only took me about 3 days to complete and only cost me about $50 including the white pants and shoes. 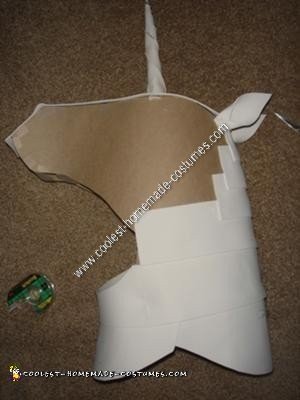 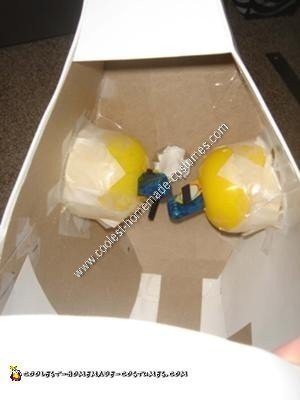 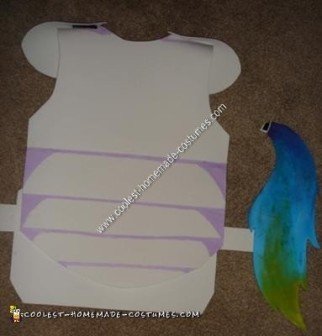