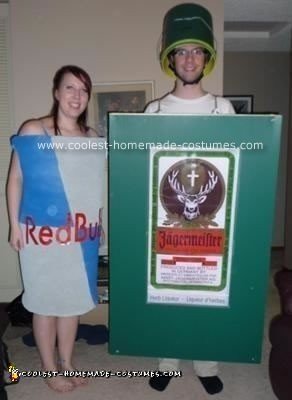 Our homemade Red Bull and Jager costumes were originally designed to be Wall-E and Eve, but upon making the Eve costume, we noticed that it looked more like a tall, slender can of Red Bull and the idea sparked from there! It was the highlight of the party! The costumes didn’t take as long to make as originally anticipated.

For the can: Egg foam for bed and lots of spray paint. Once the foam was measured to size we stapled it together and taped on the guidelines to spray paint. To make things easier on ourselves we printed the logo and glued it on to save some time.