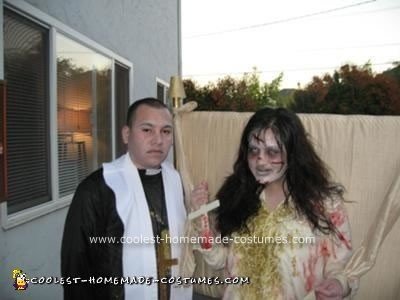 This Homemade Reagan MacNeil and Priest Couple Costume idea started out as my cousin’s, but she couldn’t attend the Halloween party we were all going to, so she left it up to me and my fiance to pull it off.

I found the nightgown at Goodwill and paid no more than 3 dollars for it. The scars on my face were applied by myself and help from my younger cousin with “Fake Skin” from Party City. It was about $2.99 per tray. I used two. We added fake blood on top of white paint and the fake skin to give the effect.

We also drenched the front of the nightgown with actual split pea soup and sprayed an adhesive over it. I highly do not recommend this. The stench of the split pea soup wanted to make me throw up all night! If you can think of a green product that will stand out and not stink, do it!

The head board was made from partical board with matting and a piece of fabric stapled around it. The posts were wrapping paper rolls and the lamps at the top were Styrofoam cups.

The priest costume was easiest. Found the dress at Savers for 2 bucks and I made the white sash from a piece of fabric and the crosses from felt. We painted his face white to depict a scene in the movie when the priest is scared to death by the sight of creepy Reagan. I also covered a hard covered novel with a paper bag, painted it black and wrote bible in white as one of his accessories.

We ended up winning the costume contest as “Best Couple”. 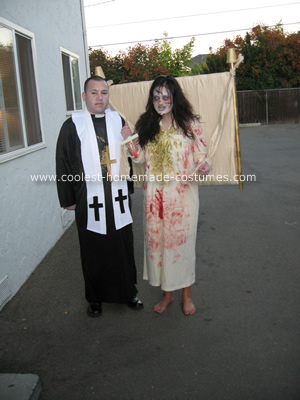 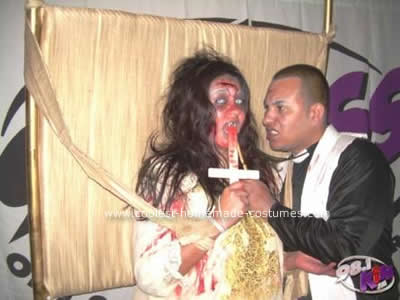 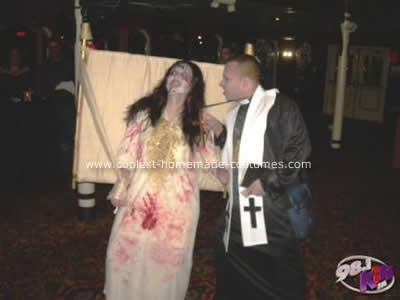 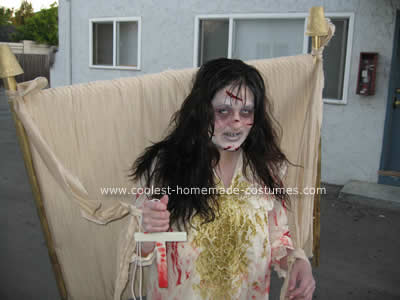