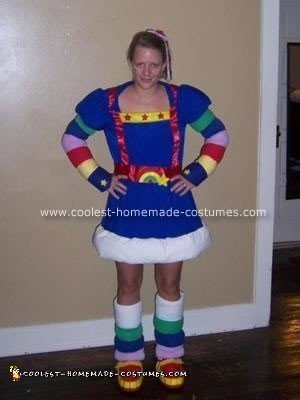 I loved Rainbow Brite as a child, so I decided it would be fun to make a Homemade Rainbow Brite Costume for Halloween this year. I started with an image I found on the internet and took it with me to some thrift stores. I bought a blue dress (80’s style) to be the foundation. I was lucky enough to find some huge snow boots as well, but they were pink and black.

I bought children’s t-shirts in the rainbow brite colors so I could make the rings on the sleeves and boots. I used an old sheet for the white accents, and to line the other parts. I also bought some felt, ribbon, and paint for extra details. To make the puffy items puffy, I used some fluff from a package I received in the mail.

I began with the boots because I knew they would take the most amount of time. It took many, many days to paint them until the color was consistent. When I was completely done, I cut felt to make the strap and a star at the end.

Then I began working on the leg warmers and arms. I cut the sheet to be the base for each item. I then cut the t-shirts into equal strips. I sewed the first one on, then flipped the second one over it so no seams would show. I repeated this until the very bottom. Then I stuffed each part with an equal amount of fluff. Finally, I turned it inside out and sewed the pieces into a tube.

For the dress, I began with cutting it to the right length. I used some of the cut off fabric to make the puffy shoulders. That way, it would match perfectly. I then sewed a wide strip of the sheet onto the bottom and stuffed it with a lot of fluff. I sewed it closed by sewing it onto the inside of the dress. I used some wide red ribbon to make the suspenders and the belt. I had to sew two ribbons together for the belt to make it wide enough. I made the rainbow emblem using some of the felt. I used some felt to make the yellow neckline of the dress and I cut some stars from the red for accents.