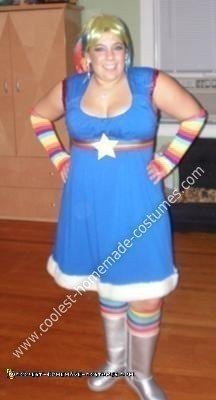 My homemade Rainbow Brite Adult costume was pretty simple to make as I don’t sew. The hardest part was finding the right blue dress. I searched a lot of second hand stores, Marshalls and TJ Maxx. I think I finally found it at a TJ Maxx on clearance.

I used an iron seam to get the white trim on the bottom. I asked a friend to sew the sequins on the arms. I used sticky-backed Velcro to make the belt with a felt star at the center, but the Velcro didn’t hold well, so I may have to actually have it sewn on if I use the costume again.

The socks and gloves I found at a local thrift store in Boystown in Chicago (they have everything with rainbows). The boots were on sale at Payless.

The final touch was a yellow wig with rainbow colors on the back of it.

Overall, I think it worked well with the dress I found and, even though it wasn’t exactly what Rainbow Brite wore, everyone knew who I was and I got LOTS of compliments and inspired at least one girl to be Rainbow Brite next year. I had a great time in the costume.