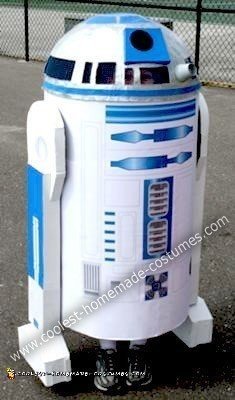 Long ago in a galaxy far, far away, a dad once said to his boy, “son, would you like daddy to make you an R2D2 costume for Halloween?” to which the boy replied, “daddy, do you think you can?” Knowing full well he was getting in way over his head, the father said yes anyway. Sure this is a man who is creative by nature as he is a Graphic Designer, but this is also a man who can’t manage to make his own bed, much less build a replica of one of the most beloved movie characters of all time.

So he starts on his Homemade R2D2 Costume, he sketches, plans, cries, then embarks on a mission that would test his every fiber. He takes his wife’s exercise ball and covers it with plaster strips, paints it silver, adds some blue and is shocked to see that it actually worked like he planned. He takes 1/2 of a plastic Easter egg and a kid’s paper cup and fashions the projection unit for the front of the head of the unit. A friend gives him what will eventually become the body of the R2 unit.

He designs the body section on his computer and prints out a pretty accurate facsimile of the real thing. Next comes some cardboard, shaped and painted to resemble the legs of the famed robot. Two Capri Sun boxes become the feet and they are screwed to 2 pieces of wood that are then screwed to the body. Wheels are added to the wood as now this costume is beginning to carry some weight.

After all, this is a 6-year-old boy who will be operating this behemoth of a costume, wheels will help him move it a long easily. Some more cardboard, paint, glue, blood, sweat and tears, and the man can almost see the finish line.

As this family lives in Florida, the man, knowing full well that it will be hotter than that fire planet place at the end of Episode 3, adds chicken wire, yes chicken wire, to the head piece, not only giving the boy some air, but a clear line of sight so he can see what is in front of him and to his side. Now, this man can stop here and bask in the glory of a job well-done. He can, but he doesn’t.

He takes an iPod, loads it with R2D2 sounds and connects it to some portable speakers, then installs those into the body cavity of the R2 Unit. Now his job is done, he has created a working replica of a true Hollywood icon, complete with sounds and rolling mobility.

Nothing left to do now on this Homemade R2D2 Costume but enjoy the smile on his son’s face and the smiles of all of those who have seen it in action.

Here’s a video of how the costume was made: