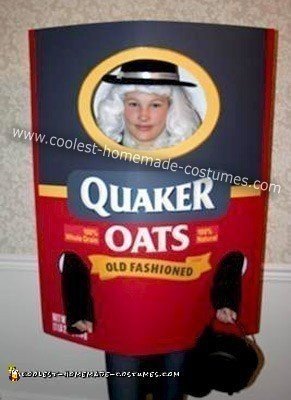 This year I went trick or treating as a box of Quaker Oats.

The logo and other graphics (including the weight in the bottom left corner!) were blown up and printed on a computer. An oval was cut out of the top of the rectangle. My head was able to peep through as the Quaker man does on a real box of oatmeal. I wore a black colonial style hat, white wig, white scarf and black jacket underneath the costume. Thick ribbons were attached to the inside of the costume using a few layers of duct tape so that they rested on my shoulders and I could support the costume.

Finally, two arm holes were cut out of the front. They provided just enough room for my arms to reach out and grab a piece of candy!

The costume was a bit awkward to walk in by the end of the night. Unfortunately it rained on Halloween so the poster boards got soaked, but they did not flop even when wet. It took a little while to complete, but the costume turned out to be a hit with everyone who saw it!