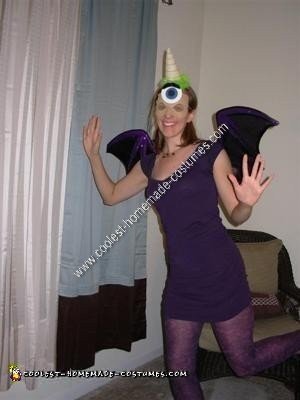 (“The Purple People Eater” is a novelty song, written and performed by Sheb Wooley, that reached #1 in the Billboard pop charts in 1958…)

Well I needed a costume for Halloween night…
I pulled out an old dress and thought, “This will do all right”, I commenced to shakin’ and I said “ooh-eee”, It looks like a purple people eater to me!

Sure looks strange to me (One eye?)

To make this homemade Purple People Eater Halloween costume I literally got the idea after staring at this old purple dress I had and thought, “Hmm, what could I be that is purple?”. To cover both of my eyes so that the big eye would be the focus, I bought a plastic half-face mask and covered it with nude-colored felt. I cut up a pair of pantyhose and glued them to the inside of the mask to hide my own eyes somewhat but to still allow me to see. The large eye was made with a piece of cardboard cut into a circle; then I layered on pieces of craft foam to make each part. On top of the eye I used an old scrap of fur fabric to make one big bushy eyebrow.

The horn was made with scraps of one-inch thick green craft foam (it comes sold in large sheets of various thicknesses at fabric or craft stores.) I had two pieces I held together and, using scissors, I trimmed the foam into a conical shape. Once I had the right shape, I hand sewed a sheath to fit over the foam with white fabric.

Using a little bit of tan acrylic paint on a paintbrush brush (and then brushing most of it off onto a paper towel), I dusted some color onto the horn so that it looked two-toned. Afterward, I used gold fabric paint to create accent lines similar to what one might think of for a unicorn’s horn. Underneath the base of the horn I passed thin elastic cord and tied the ends together so I could easily wear it on my head.

For more color, I used a small piece of a green feather boa and wrapped it around the base of the horn and threw on an old wig. Another finishing touch was a pair of purple tights to be more purple.

Oh, and of course the wings!! I chose to buy wings because I found cool black and purple glitter bat wings, but those could have been made fairly easily as well. 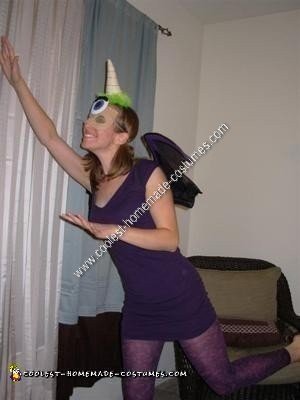 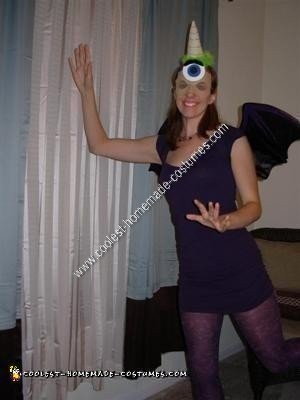