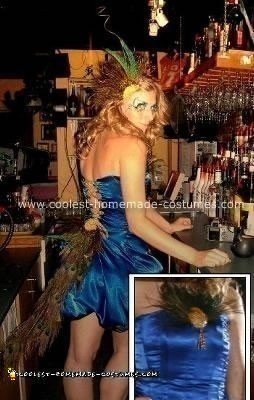 This Pretty Peacock Costume was my 2008 costume which I decided I’m going to wear again this year, only elaborate on. It was completed in two days, and was a hit the night I wore it.

I began by sewing the bustier from an old pattern. I used a gorgeous peacock blue, and a gold rope to lace it, to resemble the small golden feathers on the peacocks back. I found an old broach that I glued pretty beads, sequence, and feathers onto, and pinned it to the front so the feathers fanned across my neck.

The skirt was fairly easy to make, sewed the fabric around a tutu, so it was full and fluffy. Although you cant see in the pictures, I wore a fluffy emerald petty coat underneath to give it more rich jeweled tones.

The tail was difficult, first for finding the tall feathers on such short notice, the second for arranging them. This is the part I’m going to elaborate on if I decide to wear this costume again. I arranged them on a table the way I liked them to fall, and then carefully glue-gunned them. Messy, but I glued the top of the feather pile to a soft fabric belt. I then cut a small slit in the back of my skirt, that way the belt can go around my waste, but hide in the tutu.

To top it off I covered a hair clip with the same feathers and beads, put on waterproof liquid eyeliner in a pretty pattern, and wore gold shoes with a ribbon that tied up the leg. 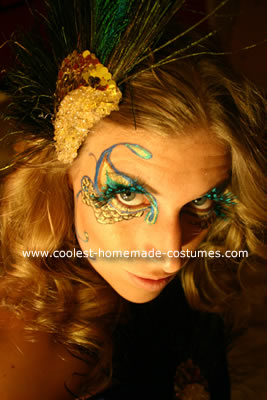 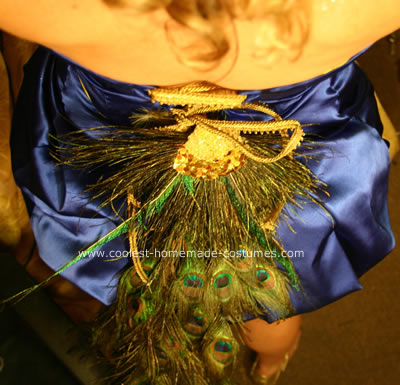