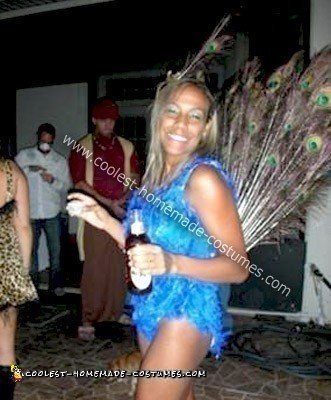 Well to start, I have to thank my friend Kieu who decided to have this Animal themed party. If it wasn’t for her I would have never attempted to make a Homemade Pretty Peacock Costume. I also have to thank my husband Steve who put up with my lack of confidence and hours working on my costume instead of being with him. I knew it was ambitious but I wanted to challenge myself so I picked a peacock.

I took an old bathing suit and hot glued blue feathers; I got the blue feathers from Michael’s. I glues and sewed little Velcro swatches to the bathing suit. I then started on the fan or “tail”. I bought really peacock feathers from eBay; I got 100 for about $24.00. I cut a piece of cardboard in the shape of a fan and then glued the feathers to this. I think I used about 50 feathers. I glued Velcro swatches to the cardboard; I was going to sew the fan to my costume but I knew I would not be able to sit down so I made it detachable. I then covered the back of the fan with blue feathers and brown pheasant feathers.

I attached the fan to the suit and it actually worked! I am very pleased with the costume. I surprised it was not heavy.