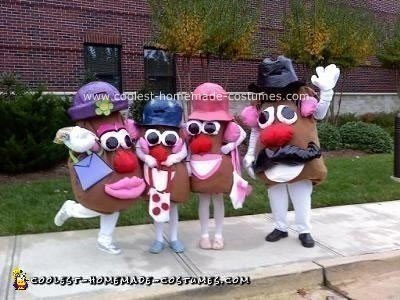 We always dress up as a family with a theme on Halloween and it’s always a secret. Last year we chose the Potato Heads. It was a great idea and fairly simple as long as you allow enough time to complete the details. Because our heads were covered, people had to guess who we were! It was awesome!!

The Homemade Potato Head Costumes were made out of fleece (I lined it and stuffed with plastic grocery bags and stuffing so we could move freely). Features that weren’t fleece were cotton (stuffed for 3 dimension)and extra material I had from other projects. Hats were paper mache’ and took the most time but were definitely worth it! They covered our faces. We cut slits and covered them with netting so we could see. Adult gloves were homemade as well. Purse and earrings were foam.

We were a hit everywhere we went and people couldn’t get over how real everything looked.