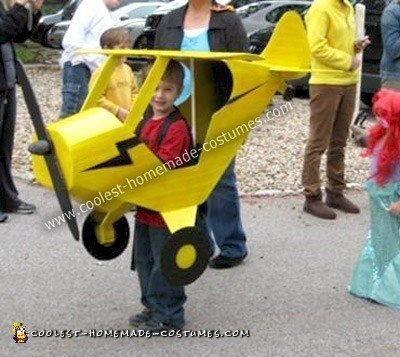 My 4 year old son loves airplanes, so I decided to build a Homemade Pilot and Airplane Halloween Costume for my future pilot for his Halloween costume.

First, I constructed a model out of construction paper just to figure out the design. I modeled it after a Classic Piper Cub.

Then, I bought some supplies: 3 sheets of 4×3 single wall cardboard and packing tape and I got to work. I used a scrap of double wall cardboard for the wing. I cut out all the pieces and used packing tape and hot glue to hold them together. The tail section took a whole day. I had to figure out how to fit all the tail and wing section together. I used a wooden rod supported by steel wire to attach the propeller to the plane so that he could spin it from the inside.

I drilled a hole in a golf ball and glued that to the wooden rod for him to hold on to and for safety in case he fell forward. I used a hot knife to shape a piece of Styrofoam for the prop spinner. Steel wire was used to support the landing gear and hold the landing gear in position. I covered the entire plane with white duct tape and then found some Cub Yellow spray paint and used 2 cans to cover the plane, black spray paint for the wheels and the inside rear of the plane.

I cut a reverse image of the lightning bolt out of cardboard, then held it up to the plane as a stencil for spray painting black lightning bolts on the sides. One of the trickiest parts was figuring out how my 42 lb, 42″, 4 year old could support the plane and keep it balanced. I tried several different things, but what finally worked was attaching a wooden rod and steel wire frame to a backpack that he wore, thus distributing the weight between his shoulders and waist.

It worked out perfectly and he carried the plane all around the church parking lot as his Preschool Fall Festival, as well as up and down the street on Halloween. This turned out to be a lot more work than I envisioned, but the smile on my son’s face in the Preschool Costume Parade: PRICELESS!