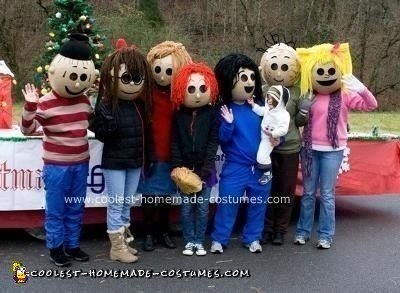 Our bank participated in a Christmas Parade in our city. The theme for the parade was “A Charlie Brown Christmas.” This is our best photo from the day and includes, Linus, Marcie, Peppermint Patty, Freida, Lucy and Snoopy, Pigpen and Sally Brown.

We blew up balloons, covered them with plastic wrap and then covered them with four layers of paper mached newspaper. We used a half water, half glue mix to make our “paper mache.” Then we spray painted them, cut eye holes, covered those in mesh and used felt and pipe cleaners for the rest of the facial features. Then we hot-glued yarn to the heads. Some of us covered the heads in felt before adding yarn, just in case the yarn was too thin.

After that, we dressed as our characters. We were originally going to wear dresses that we found at Goodwill, but it was too cold. So we all tried to find sweatshirts the same color of our characters and that worked out much better.

Our Homemade Peanuts Gang Group Costume was the winner for best float/costume in our city’s parade.