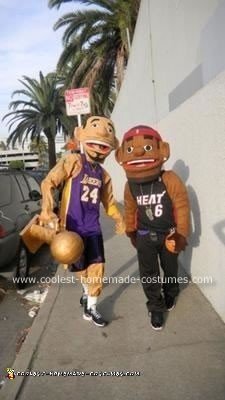 As huge NBA fans, my buddy and I decided to create puppets modeled after the famous NIKE commercials. Since there were two of us, it was the perfect fit! We gathered some pictures up on the internet and threw a few grids on them to get the proper proportions. Then the fun began!!! … along with a few hot glue gun burns along the way :-/

How We Made Our Homemade MVPuppets Couple Costume:

1. Used a beachball to use as the base of the head. Inflated it and covered it with paper mache (corn starch and water and newspaper).

2. Paper dried and hardened and then was able to add more layers to make it stronger.

3. Once layering was done, I deflated the beachball and removed it, leaving me with a hollow paper ball.

4. Added nose and chin with same process of adding paper and layers.

5. Bought the fabric and cut to size and hot glued on head.

6. Sewed the hell out of some purple shorts and made some gloves with the index finger taped with gauze (Kobe’s signature index finger).

7. Made the championship trophy with the same process except I used a smaller beach ball and an old trash can as the “net” part of the trophy.

9. Already had the Kobe sneakers and also bought another jersey to match the shorts.

10. Drew on the tattoos with a sharpie.

11. Created muscles on a dri-fit tee by sewing pockets on the shoulders and biceps and stuffing them with cotton filling.

The entire process took about one month and lots of last minute tweaks. It was all worth it though on Halloween night when we received plenty of love and compliments. We even hit the stage at the famous West Hollywood Halloween Carnival (as you can see in the video)! hahaha. 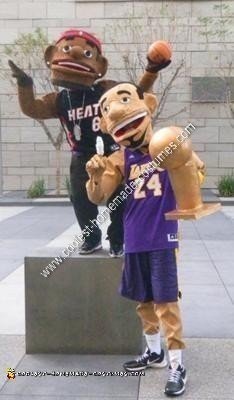 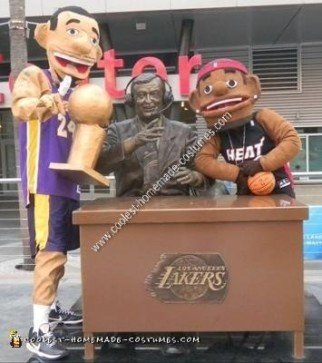 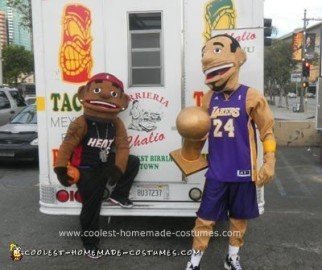