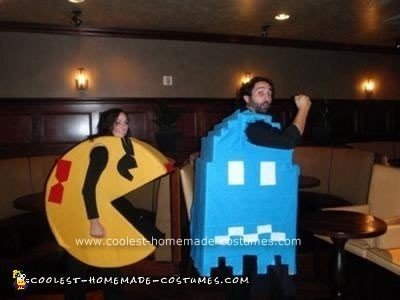 This Homemade Ms Pac Man and Ghost Halloween Couple Costume was created for a “80’s icons” theme party that we were invited to. My fiance suggested PacMan, but since, technically, that was the 70s, we did Ms PacMan. I was the “blue” ghost that she’s about to gobble up. Seeing just the ghost, people didn’t get it, but once they saw her it all made sense.

Both of these costumes were made on the day of the party. It took us about seven hours to construct them out of cardboard. Large pieces of cardboard, hot glue, tape, and felt were our major ingredients. The cardboard for Ms PacMan was cut out with strategically placed tabs and glued together, reinforced with tape. It was very solid and sturdy.

For the ghost I just happened to find a box the proper size. The hard part was cutting the cardboard to give it the old school “dot matrix” look. Both pieces were covered in felt that was purchased at a craft store and secured on with hot glue. They were just big enough to grab attention, but easy enough to maneuver through the bars and clubs.

Unfortunately we didn’t make it out in time to enter any contests. I’m sure it was funny to witness us running across the street… Ms. PacMan chasing Ghost.

Want a Fun and Easy Homemade Costume? Be Pac-Man!