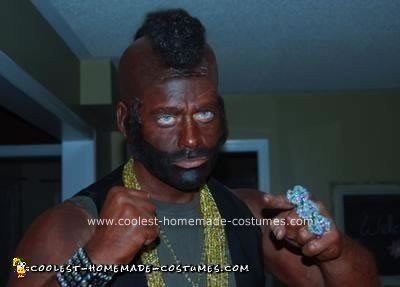 My Mr. T took a lot of paint and a whole lot of patients to make it work. I am 6 foot 1″ white guy trying to pull off one of the toughest dudes in the world. Worked out well. Though the blue eyes kind of gave away who was dressed up like Mr. T to all of the attendees. My wife took 2nd prize for a punk rocker.

The costume is made up of a scull cap wig, paint, chains, torn shirt, cargo pants and boots. Had a ball but I began to melt in the heat and by the end of the evening the paint was dripping off me. It was kind of scary. I went from Mr. T to dawn of the dead in just a few hours.

Cheers to all of the Mr.Ts that took on the challenge of the costume.