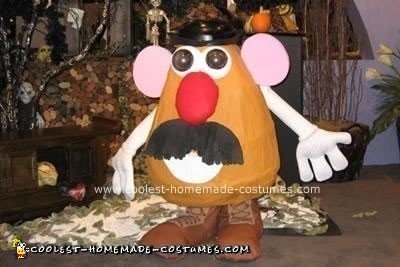 My son and I love Toy Story and Mr. Potato Head. So I decided to go all out and make this Homemade Mr. Potato Head Halloween Costume. It is made with chicken wire, papier-mâché, and foam. His hat is an extra-large bowl painted black. The eyes were made with two clear ornament balls and black wire mesh behind them, so my son could see and breath out of the costume. The shoes are vinyl over very large clown shoes.

I started preparing this costume back in September so that the papier-mâché would dry properly. I created a shell shape and arm holes, to support the papier-mâché. I used my son’s Mr. Potato Head as the model, including taking it to the paint store to match the color. If I had to do another costume using this technique, I would use a stiffer type of wire, rather than chicken wire. The chicken wire bent and gave a little too easily.

My son could not believe how much it looked like Mr. Potato Head. He was very happy with his costume and likes to see and share the pictures of him in it. His friends ask him where did you stand? His answer is, “Inside of it silly!”