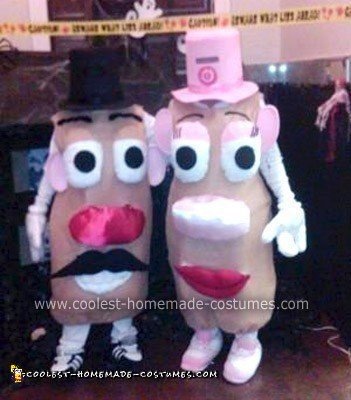 Our Mr. & Mrs. Potato Head costumes were made out of felt, with stiff batting inside and Velcro at the shoulders. We added elastic at the bottom to give it more of a potato look.

Having no pattern, we just drew shapes for the eyes, nose, mustache, teeth, lips and ears. The eyes, nose, mustache, lips and teeth are made out of cotton material, satin and felt which we stuffed with fiber fill. They were attached to the potato with Velcro, clear thread and safety pins. We made the eyebrows out of felt with adhesive backing. The eyelashes were made out of pipe cleaners that were hot-glued on. The ears were also made out of felt; we inserted some stiff batting, filled the edge a little with fiber fill and hand sewed them.

Mr. Potato Head’s hat was made out of a mop bucket and a sunscreen for the car window. It was covered with black material and a ribbon at the bottom. A hole was cut out where the wearer’s eyes would be and some see through matching material or tulle was glued on the inside.

The pattern for Mrs. Potato Head’s hat was also drawn to the correct size to go over the head. The hat was made out of stiff batting and material which was hand sewn. A hole was also cut out for the wearer’s eyes and pink matching tulle was hot-glued on the inside. A flower and ribbon were attached to finish it off.

We purchased white long sleeve shirts, white leggings and over sized clown gloves. Our over sized slippers were purchased online. We had a lot of fun making these costumes and it took a while to finish.