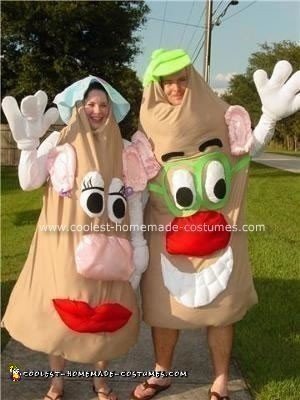 My husband and I were Shrek and Fiona last year for Halloween and we won first place at a great party, this year we had to top that so we decided to go for a Homemade Mr. and Mrs. Potato Head Costume. I saw the version that Marianne H. from Medford, OR had done and thought it was great.

The arms holes look best with just your elbows coming out so our Mr. Potato Head tuned out best.
The body parts were mostly a slightly stretchy cotton and some were felt. Felt is so easy to work with and sew into whatever shape you want. I left small opening to stuff what I needed and then either sewed or hot glued them shut.
I actually hot glued all the body parts to the body.

The ears I made with a shiny fabric because it made them look more like the plastic parts but it was harder to work with. We bought our long sleeved white shirts. The cartoon gloves, which truly make the outfit, were from a party store.

We had so much fun and won first place again this year at the party! We also wore them for a children’s event at our church on Halloween night and we got a lot of notice out on the front lawn waving to people passing by.

I took me part of 2 days to complete these. But I was very pleased with how they turned out!