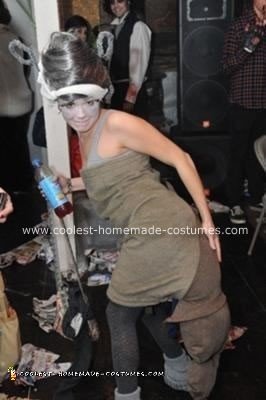 This is a homemade moth costume I created for my friend. I made a bodysuit out of fuzzy gray material and pinned it together between the legs and let it bunch up a little, so the legs would look more bug-like. I bought a pair of sweater textured tights for the legs and made black pointy feet out of a pair of “witch boot” covers.

I made the moth butt out of some brown nubby material by cutting out a simple snowman shape on two pieces of material and sewing them together. I then stuffed the moth butt with old pillow stuffing and attached it by sewing it to two strips of material that were tied around the waist underneath the body suit.

I finished it off with a pair of wings from the dollar store, which I attached shredded gauzy strips of material to and later spray painted silver. And finally, a cheap grey wig, which was pinned up to form a beehive, with antennae stuck in the folds of hair. This was also spray painted silver. The face was painted grey with a cheap face paint kit and she wore big false eyelashes. She was the hit of the party in her homemade moth costume!