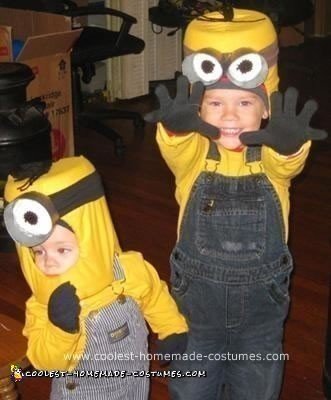 I had no idea what I wanted my 3 year old and my one year old to be; only that I wanted to have homemade costumes for them. While visiting my parents I found some empty tubs that once contained pretzel sticks, and came up with a homemade Minion Halloween costume idea from the new movie Despicable me. My step dad cut out an area for their heads to fit in, with a heavy duty pair of scissors, and then drilled small holes at the top of the buckets so that air could pass through. He also cut arches on each side of the tub for my 1 year old for his shoulders.

I bought some yellow duct tape to cover the edges. I also bought three yellow shirts: one for each of them to wear, and one to cut up and cover the tubs (Size 5T). I cut off the sleeves of the one shirt, and sewed them together to cover my 3 year old’s helmet. Since my one year old’s helmet had a round opening for his face I positioned the now sleeveless shirt so that the neck hole was where the face opening was, and cut and sewed the rest of the shirt to fit the tub. I used the yellow duct tape to attach the modified t-shirt to the tubs.

For the goggles/eyes I bought 3 Dean’s brand milk chugs: 2 one pint (473 mL) size , and one quart (946 mL) size (I bought chocolate milk, but I doubt that really matters). When they were empty and washed out- I measured 1.5 inches up from the bought of the chugs, and drew a line around at that height. I cut them with a sharp knife around that line; then covered them with grey duct tape. I crocheted the eyes in a round pattern. One row black yarn, one row brown yarn, then 4 rows white yarn for the pint size eyes, and 6 rows white yarn for the quart size.

For the band I used women’s hair bands: one black and one brown (because they came in a multi-colored set, and there wasn’t an all black set). Using a hand sewing needle I pre-poked holes in the bottom of the milk chugs at various places. Then using durable black thread I sewed both the milk chug bottoms and the crochet eyes to the hair band. The two pint size went on the brown band; creating a two eyed minion. The one quart size went on the black band; creating a one eyed minion. I also put a stitch through the sides of the two pint size chugs so that they were attached to each other in the middle, and preventing them from moving around in different directions when my son moved.

On top of the helmet for my 3 year old I sewed a sing loose stitch using the same thread that I used to sew the eyes to the hair band. Then I cut 10, 4 to 5 inch, strips of black yarn; I varied the lengths a little bit; and then I tied the strips of yarn to the loose stitch on top of the helmet for hair. On top of my 1 year old’s helmet I made 8 loose stitches, stitched so there was 2 rows of 4 stitches. Then 1 cut 16, 4 to 5 inch, strips of black yarn, and tied to pieces of yarn to each stitch. I put the two eyed goggle on my 3 year old’s helmet, and the one eyed goggle around my 1 year old helmet.

I bought my 3 year old dark blue overalls, my 1 year old already had a pair of white and blue striped overalls. I also bought black knit gloves for both the boys for two reasons: one – the minion wear gloves in the movie, and two – so their hands wouldn’t get cold while trick-or-treating. I also bought them each a knit hat to wear under the helmet so they wouldn’t get cold. Both boys also wore thermal shirts under there yellow shirts to stay warm, and not have to wear a coat while we went out. 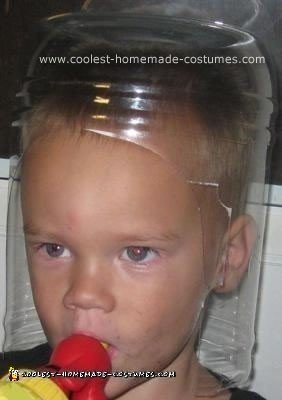