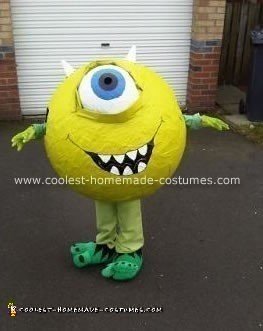 I decided to make Ross his favorite character out of Monsters inc. It is also Ross’s birthday on Halloween so we like to do something special for him. He will be entering the Halloween procession at his school.

I made the Homemade Mike Wazowski Costume using a gym ball and papermache. I covered the ball several times till the ball was hard. Need to be very careful not to cover the plug or else we need to burst the ball inside. I made the eye out of a balloon and more papermache and stuck it to the large ball. I cut a hole in the center of the eye and the mouth to allow Ross to see where he is going. I cut holes for his arms and body too. Ross is wearing green trousers and top and also his daddy’s slippers.

I got the idea from a costume that I made last year for my other son, it was a pumpkin made in exactly the same way but a scary one and he held a torch inside to make it glow.