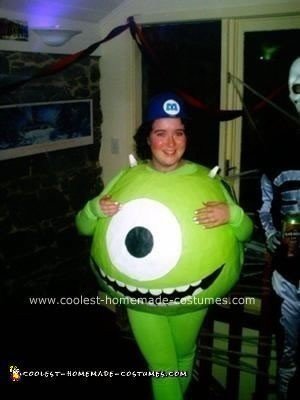 My girlfriend was sick of looking for a costume where all she could find were ‘sexy’ versions of characters. So about 2 months prior to Halloween she suggested that she should find the most random and unflattering costume about and jokingly mentioned a Homemade Mike Wasowski Costume from Monsters Inc. After a few days I came back to her and asked how serious she was about the idea.

To work I went with a large exercise ball, some newspaper, plaster bandage and paint! I basically just started paper macheing onto the inflated ball adding some plaster bandage for strength. I waited till it dried, cut the holes for her and gave it a paint job. The horns are the pointy bits out of egg cartons.

We had a friend of ours sew a green lycra body suit that covered her arms and legs and a simple toy construction helmet painted blue on her head.

She was a hit of the party but couldn’t sit down so it came off near the end of the night. She’s going to hate me for putting this up!