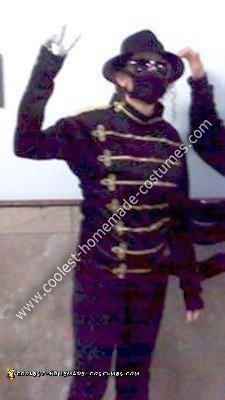 Ever since the death of Michael Jackson, I knew that I would dress up as him for Halloween. I already have naturally curly hair. My sister bought some silver gloves from a flea market. I just took some short black dress pants and made them even shorter and started with my Homemade Michael Jackson Costume.

After numerous trips to Goodwill, I finally gave up on the fact that I was not going to find a black sequincy blazer. So, I had to buy a costume jacket. It was an XL so I had to bring it in a bit. I then bought some big sunglasses from Goodwill. Really they could have passed as Elvis’s. Hummmm, that is an idea for next year.

Anyways, I bought a plastic fedora from a costume store and dyed my hair black. DO NOT FORGET THE WHITE SOCKS. It would have been better with sequins. I am a woman and I really don’t look like Michael Jackson, so that morning I quickly made a black face mask. I cut up a black tank top I had. I made a square and hot glued the straps to the sides, so that I could hook it around my ears.

I had so many people taking my picture. I actually had someone stop me while I was eating my lunch, to take my picture. On the way into the restaurant people were honking at me. GOOD TIMES!