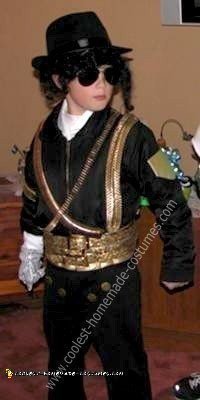 My son has enjoyed Michael Jackson’s music for at least a year now. We knew this would be his choice for a costume this year but the tough decision was which ensemble to do. While watching the youtube video of the 1993 Superbowl Halftime show when Michael performed a few of his songs for the fans at the game, my son decided on a Homemade Michael Jackson 1993 Superbowl Halftime Show Costume.

The hat, glasses, and gloves were purchased as a set from Target. The kit also came with a wig but we chose to use one that we had for a different costume. The jacket, pants and belts were found at our local thrift store. The belts around his waist were black so I used hot glue and glitter to make them gold. I used gold embossing powder on black buttons for the pants. The glove he wore on his right hand was made by cutting a white sweatshirt then using gold puffy paint to appear as buttons.

Seeing him doing the Moonwalk all night was priceless! 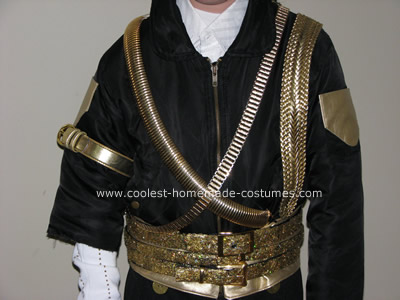