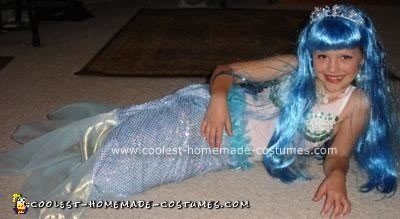 The expensive part came when I decided that I wanted something original. I bought a bra and handsewed little beads and seashells on it. It turned out beautiful and added that extra touch. I then purchased a cheap blue wig and some fake eyelashes to complete the costume. My daughter wore an old ballet leotard under the entire costume, to make it a little more modest. This costume was a hit and I even was able to sell it later on eBay.

The only drawback was that it wasn’t easy to walk in but what mermaid has an easy time walking on land?