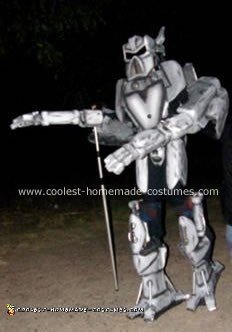 I have always wanted to a larger than life costume. I decided to do a robot because the design is wide open and the recent popularity. There are many different styles, shapes, and sizes. I spent several hours looking at different robots online.

I then sketched-out my Homemade Megabot Costume. Once the design was finalized, I began construction. I used mostly Styrofoam scraps and wood. The stilts are constructed from wood and wrapped with Styrofoam. I used foam glue that I purchased in the large tubes at the local hardware store. All shaped were rough-cut with a large serrated house knife, then finer cuts done with a smaller knife or xacto.

The surfaces were smoothed out with sandpaper. All surfaces were painted with Acrylic paint through an airbrush. Some of the lower parts were hot glued onto some sweat pants. The others were strapped on using old straps and small bungee cords. It was coming along good, but I wanted more of a “WOW” factor. SO, I added some airline connected to a small tank on the back. The lines run up through the arms and air tips were mounted at the top.

With the turn of a dial on the chest plate, powder shoots out. I then went further and added a voice changing device into the helmet. I was finally done, but wasn’t sure how I was going to get to the party destination. I summoned some help and made it there. Everything stayed together and worked. It was Awesome!