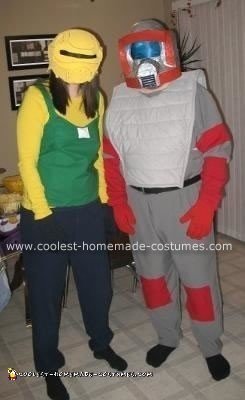 Back in the mid 80’s a cartoon came out called M.A.S.K. It captivated me and has made me a life long fan. So, this year for Halloween I thought it would be great to go as Matt Trakker and drag my girlfriend along as Gloria Baker. This issue with being one of the M.A.S.K characters is that because it hasn’t been around for over 20 years, costumes were hard to come by. I couldn’t even find an example of someone doing something like this online, so I just started from scratch and the Homemade M.A.S.K Agents Gloria Baker and Matt Trakker Costumes were born.

Modeling the clothing off of pictures that I had, my girlfriend sewed the costumes and I made the helmets. Getting all of the details were hard, and because I’d never made a mask before, they were far from being perfect, but the results still turned out fairly well for me. The helmets were constructed with a cardboard base for the skeletons and then covered with paper mache.

Then the painted and detailing finished everything off. It was a lot of work to put it all together, but it was one of the best and most rewarding costumes I’ve had to date.