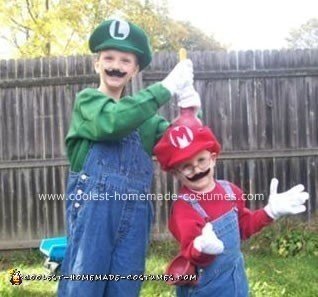 My kids (8 year old daughter and 4 year old son) came up with the idea of Homemade Mario and Luigi Halloween Costumes in the summer! After trying to persuade them to think of something else as we got closer to the date, they finally won!

After looking online and finding Mario and Luigi costumes outrageously expensive and not really authentic looking, we decided to do it up the old-fashioned way, at home!

I went to our local Goodwill store and purchased denim overalls for each of them along with their red and green sweatshirts. After that, I found a very simple pattern for the character’s hats that even I could manage! (I used red and green fleece). We made mustaches out of sticky-back black felt and added mini-plungers from the hardware store. They also wore white gloves as a finishing touch- 2 pair for a buck!

All in all, we spent around $30 to make BOTH costumes! They were such a hit and people everywhere knew who they were!