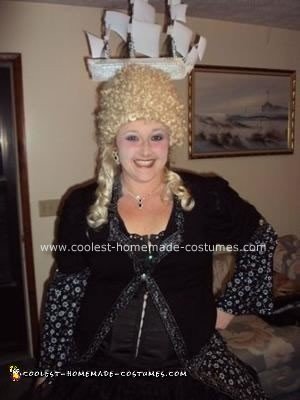 This homemade Marie Antoinette costume had to be started months in advance. I built a model ship which I found on eBay for about $30 bucks. This ship was the Flying Dutchmen Glow in the Dark version. As I was building the ship I would take sections and glue on silver glitter jewels.

I bought the wig and attached a foam ball in the top on the inside. Any type of small foam piece found at a local craft store will work. After attaching it with large amounts of glue to the inside of the wig, I finally had to complete the entire ship. After I finished building the model ship (which I will never do again, models are not my thing) I used a wooden stick and cut it down and attached it to the bottom of the ship. From there, you can just cut a small hole in the top of the wig and use another massive amount of glue to hold the wooden stick down into the foam ball placed at the top of the wig.

For the costume attire, I found a cardigan sweater at WalMart, and added trim to it and new buttons to suit the period clothing look. Also, I added the bell sleeves from the same material that I built the skirt covers from. Under the sweater was a black corset (which will kill your ribs if you are not use to being in corsets for long periods of time).

The skirt was made by getting a black tutu and then adding hip sacks underneath the tutu. The sacks were just stuffed with newspaper and plastic bags to give the skirt the wide look. Finally we added the longs skirt covers and attached them to the cardigan and I was Marie Antoinette via her mourning period. 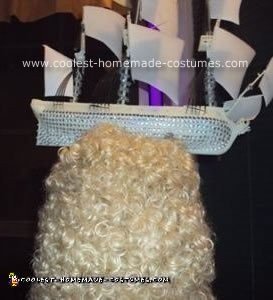