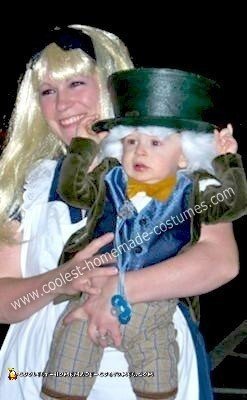 Over the years I have loved Alice in Wonderland, from collecting tea cups and creating my own Wonderland area in my home to different copies of the movie and books. It’s one of my favorites, which is why I decided this year I would be Alice and my son would be the Mad Hatter. He is almost 15 months old and I wanted him to have a unique outfit.

I usually make my own costumes and so the challenge was on. I had some of the items used for his costume, and then others I made. His jacket was made from a pair of pants I found at the Goodwill, I used one of his jackets as a template since I have never sewn before. I also made his hat and his collared shirt and bow tie. His hat was a small lamp shade with a paper plate on the bottom to be the rim and I used a paper plate to be the top. I then painted it green and add ribbon and a decorative broach for the front.

His hair came from a stuffed Santa toy I found at the Goodwill. I cut his beard off and made the hair come out from the hat and used some for his eyebrows. I was very happy with how this Homemade Mad Hatter Baby Costume turned out.

My outfit was made with different items I found. My apron was made from a dress at the Goodwill, I had the shoes and bought the socks. I found a dress, and bought some daisy’s. This was so much fun to do. I have to also say my son was the cutest Mad Hatter ever.