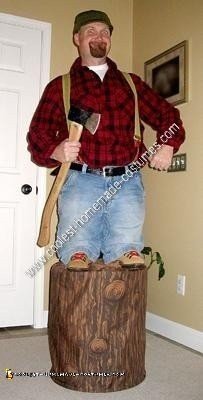 My Homemade Little Paul Bunyan Optical Illusion Halloween Costume Idea came about as I pondered all the cool illusionary costumes I’ve seen over the years. I figured it wouldn’t be too hard to find the clothing for the top half of the costume. I already had most of it – wool hat, T-shirt, flannel shirt, suspenders, belt, and a pair of denim shorts. I also had a short camping axe which I carried in a loop of nylon webbing attached to my belt.

The bottom stump portion of the costume was created using a collapsible, nylon laundry bin I found at Walmart. I turned it upside down and cut 2 holes in it for my legs to go through. Then I covered it with some cheap brown fabric which I made to look like tree bark with a couple of big, black Sharpie pens. The boots I picked up at Goodwill for about $8. I cut them vertically, down the back and removed the heal portion of the sole. Then I punched holes in the leather and inserted some laces to wrap around the back of my knees. I stuffed the boots with newspaper so they would keep their shape. To hide the gap between the boots and the stump, I attached two fabric sleeves to the brown fabric on the top of the laundry bin.

The sleeves went over my knees and were held in place when I laced the shoes over the top of them. It made for a seamless transition from stump to boots, reinforcing the illusion. The only thing hard about this costume was trying to walk in it. Tie your knees together with about 6” between them and you’ll get the idea. I had to adapt a type of shuffle all night but it was worth it – this costume got a lot of laughs.