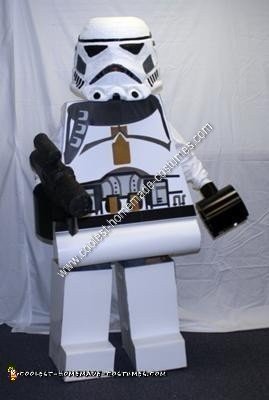 Every year at Halloween my company has a department costume contest. Every year is also a challenge, as we can never agree on what to be as a group. While searching on the internet, we came across LEGOGuys.com and were instantly inspired. We each decided on the Lego character that we wanted to be and our individual month-long journeys began.

I decided on a homemade Lego Star Wars Storm Trooper costume after I found a round piece of styrofoam that would make a great helmet bottom. I took my son’s tiny Lego Storm Trooper toy and photo copied it to get the proportions and the detail for the body and the gun. I have various photos showing each part of the body as I was making it. I especially have photos showing how the big gun was born.

For the helmet, which is by far my favorite part, a mostly rectangular chunk of glued pieces of styrofoam took shape into the final product. It was a tough journey: working full time, 2 kids, a household to maintain, a few hours here and there everyday. My wife was not so happy I was using her sharp kitchen knives to carve my helmet and my gun, but it was worth it. At show time, we were larger than life! We had a Storm Trooper, Superman, a witch, a baker, and the Toy Story alien.

We won our department contest and after working so hard on this I had to wear it again. So 2 of us wore our costumes again on Halloween night and were an instant hit. We were stopped many times for kids and adults to take pictures with us. People were in awe at the fact that they were homemade. It was hard to walk as long as we did, so our wives helped us out part of the night and wore them also. It was a great night! 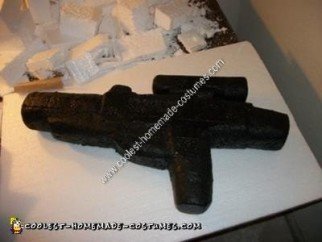 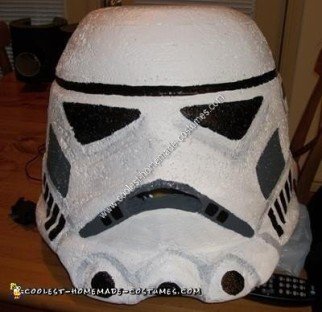