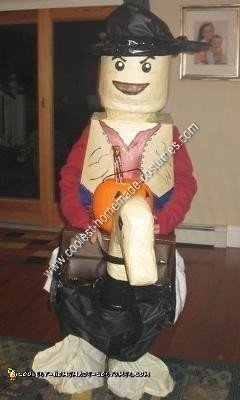 I’ve always wanted to make the illusion type riding or piggyback costumes. My boys were not interested. They wanted Lego costumes after seeing last years winners. The problem making Lego costumes to scale is they are shorter and wider and my boys are taller and thinner. I didn’t want them so bulky that they couldn’t move around in them at the scout Halloween party, block party and for trick or treating. Then I saw this Prince of Persia set my son had and it solved the scale problem and allowed me to make the illusion Homemade Lego Ostrich Jockey Halloween Costume I wanted.

I started with the head based on some instructions from last years winners. I only used foam for the bottom and top that needed to be rounded. I used poster board for the middle part and covered it all with masking tape for the right color. Foam sheets pk/5 for $11 and poster board $.50 each. I used left over material I had from a tiling project for parts of the body. It looks like orange plastic waffle with a fabric backing. It was easy to cut and bend. I covered that with poster and painted the shirt design with acrylic paint. The actual toy had a yellow shirt and sleeves but to save time and money I went with red since I had the shirt. The ostrich part started with cardboard for the base. I used foam board for the wings, foam wrapped in masking take for the head, black garden material hung over the cardboard and all of this taped on with black duct tape. The Lego man legs are made of cardboard and attached to the top of the ostrich cardboard base. I painted with brown spray paint.

The hat had 3 levels. The first level is a foam ring put over the head on an angle. The second level is actually the top part of the head painted black and covered with black tape. My son bunched up some foam scraps, covered them with a fabric scrap and put in on top with black tape. The ostrich legs were a very last minute challenge made with a plastic ($5) shower curtain liner with the same color masking tape. These were pinned to his khaki pants. He wore black shorts over the pants. Now he has on the red shirt, pants with ostrich legs attached and black shorts. First the ostrich body with jockey legs attached go on with masking tape suspenders to keep them on. Then the upper body with head attached go over that. I ran out of time to make the hands. He was a big hit in the neighborhood.

I used mostly materials I had but I did spend about $40 on materials. I didn’t have time to make two so I went with the alien abduction illusion costume for my other son, who won first place at the scout party. The costumes were a bit heavy so they only did a couple of streets of trick or treating and were ready to go home – which was FINE with me! 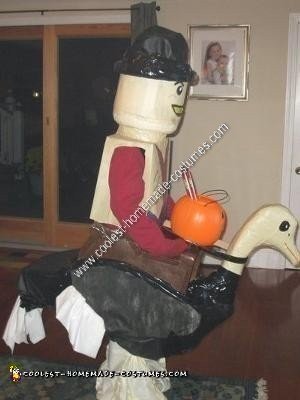