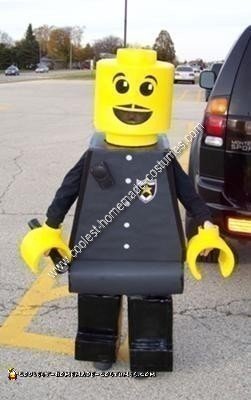 Last Halloween after finishing my son’s awesome robot costume, I quickly came up with the idea to create a Homemade Lego Minifigure Costume. There are Lego’s all over our house!

I tried to make the costume look as much like a Lego guy as possible. I’m not sure how to scale things up, so I eyeballed it. My first step was to make a list of supplies and then buy them. Supplies included 2 inch thick Styrofoam insulation, cardboard, poster board, duct tape, and spray paint.

I started out with Styrofoam for the top and bottom of the head. I used a large frying pan to trace circles in the foam. Then I used a plate to trace the circle for the neck, and a bowl for the circle on top of the head. I cut them out with a steak knife. I wrapped cardboard and posterboard around it to get the shape of the head, then painted it yellow.

I painted the face by hand using acrylic paints. I used screen that was spray painted black for the mouth, so my son could see through it.

The body was easy. I just drew out the shape on cardboard and started cutting. I made the sides and back the same way, then covered them with black poster board. I also hand painted the buttons and badge. I used my son’s voice changer as the “police radio” so he could say things like “you’re under arrest” in a cool voice.

The hands were made out of Styrofoam. I cut 6 circles out, 3 for each hand, and glued them together. Then I cut out the inside to make the Lego hand shape. Then I sanded, and sanded, and sanded them. I primed them then sprayed them yellow. The wrists are cardboard tubes that my husband got from work.

The legs are cardboard, Styrofoam, duct tape and poster board.

The costumes is held together with tons of duct tape. One of the best things about this costume, in my opinion, is the homemade look it has!

It was so much fun to make this costume and my son had the best costume at his school!