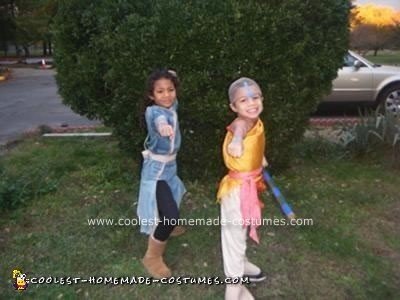 When my children wanted to be Last Airbenders Aang and Katara from that popular TV cartoon show, I looked online for homemade Last Airbender costumes. I nearly fell off my chair when the lowest price I found was $59! So I Googled images of the characters to see if maybe I could make the costumes myself.

1. Top: A) I looked for 2 x 1 yd of satiny fabrics that closely resembled the gold and dark red colors worn by the character. B) I don’t sew so I draped those over his left shoulder, gold over red, and safety pinned them in place. C) I used a sash I had around the house to tie over the fabrics, and around his waist.

2. Pants: these were the bottom half of a Luke Skywalker costume I’d found. I could have also used black warm-up pants or his sister’s black softball pants.

3. Head: A) I snagged a bunch of those disposable footsies (cut off pantyhose) they have at shoe stores to simulate a bald head. B) we had blue painter’s tape around the house so I cut arrows out of the tape and put it on his forehead and back of his hands.

4. Staff: this was his sister’s karate stick — a dowel wrapped in diff color electrical tape.

Katara:
1. Top: A) the top half of the same Luke Skywalker costume fabric spray painted blue. I used tape to mark off the collar and stripe going down before I sprayed. B) I cut off a strip of light fabric that I’d bought for her skirt to tie around her waist.

2. bottom: A) for her skirt I found fabric that closely matched the top and fabric spray painted it blue. B) after pinning it around her waist, I cut 2 slits in the side. C) she wore her black softball pants and boots beneath the skirt.

3. necklace: I krazy glued a button to some ribbon and fastened that around her neck with a safety pin. Using Velcro is another option as the pin will eventually fray the ribbon.

Total cost for both homemade Last Airbender costumes: about $30.

Anyone who watched that show IMMEDIATELY knew who they both were, and some of the kids excitedly screamed out — “There’s Aang!”/ “Hey, it’s Katara!” 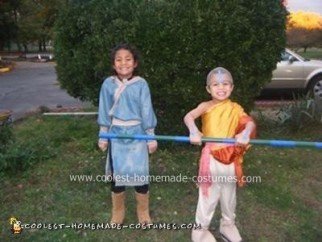