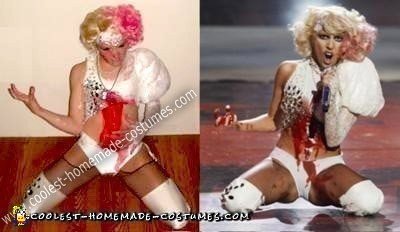 I created this Homemade Lady Gaga MTV Video Music Awards 2009 Costume by hand after being inspired by the 2009 MTV video music awards performance of Paparazzi by Lady Gaga. It was really impressive to see a performer that did more than a song and dance, but instead told a story. To me, it was a 3 minute theater performance. That may seem over the top but it made me realize the lack of innovation in current music scene and performance.

Gaga is bringing back a movement that encourages creativity and performance art to enhance the music. Many people have attempted Lady Gaga’s fantastical looks. In fact, Lady Gaga was one of the most popular costumes this year. Having said that, I think I really took it to a whole new level. I did my best to perfect almost every inch of the costume. I spent over a month toiling away. Everything you see is completely hand-crafted. I have sewn, hot-glued, and dyed all the intricate pieces onto a one of a kind costume.