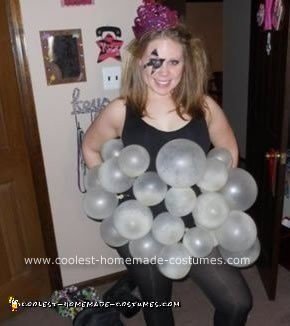 There was a Lady Gaga themed party and instead of dressing up like her, I wanted to mimic a certain costume. I replicated her bubble costume.

I purchased a black leotard from Joyce Leslie and bought a package of 50 opaque balloons. I blew up the balloons ranging in size and pinned them with safety pins to the leotard. So that you wouldn’t see the pins, I started the pins from the inside of the garment. I made the homemade Lady Gaga costume the night before because the balloons will deflate otherwise.

It took about two hours to complete. I teased my hair and copied her star eye makeup. I wore black tights and pumps too. The only thing that I had a problem with was buttoning the leotard! It was almost impossible to reach over all of the balloons to button it, so I needed someone to do it for me.

The other problem I had was that people wanted to pop my balloons all night!! The Lady Gaga costume cost about $25 to make!