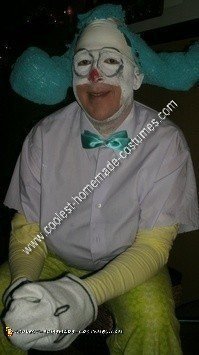 This is a Homemade Krusty the Clown Halloween Costume from The Simpsons.

For Krusty, I drew immediate inspiration. The biggest challenge for me was, of course, emulating that zany hair.

How I did it(from head down):

I cut up a long, wool-like, aqua-green scarf from Walgreens into two pieces. I then filled each end with 200-300 pieces of cotton balls for volume. In the middle of the cotton balls lain a rubber coated piece of wire that stretched over 12 inches long (each).

Connecting each individual part of the scarf to the side of my head (which to maintain the faded white of Krusty’s head, I used a swimmers cap), I tied one end of the wire around a 3M wall hook that was duct taped on each side of my head. To prevent any duct tape from showing, excess strands of the scarf were tucked in on the sides.

For that “five o’clock shadow Homer Simpson look” I used woman’s foundation as evenly as I could with only my fingers.

The bowtie itself was actually the top of a woman’s hair clip that I stripped the metal backing of and duct taped the back of the “bow tie” to the center of the collar area.

The shirt was bought at Kohls. For the arms, a long sleeved yellow t-shirt was cut from the body and used as “arm gloves” for that Simpson-like skin. The pot belly was courtesy of a ragged old sports pillow.

I had drawn black lines using permanent marker around the outside of the “cartoon gloves” I purchased to resemble the look the character’s gloves have (or that of any animated character). 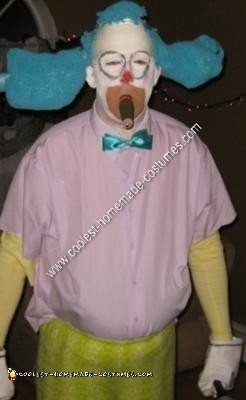 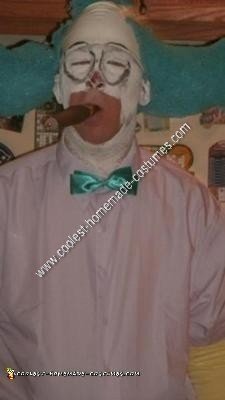 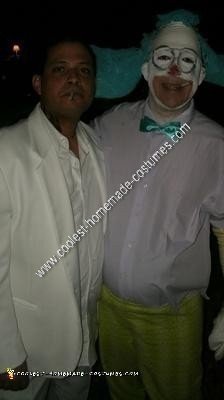