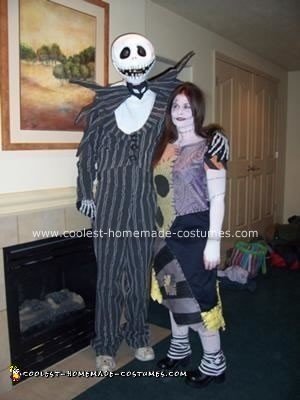 Jack and Sally from Tim Burton’s Nightmare Before Christmas! When I decided to make these Homemade Jack Skellington and Sally Halloween Costumes I wanted to make sure they were authentic and as close to the characters as possible, right down
to the very last detail. Everything you see was hand-made all except for Jack’s mask and white t-shirt and Sally’s shoes. Both costumes were quite detailed. Jack was adjusted to my husband at least 3-4 times to make sure it fit snug as Jack wears his quite refined. The white stripes were hand painted on as to match the clothes Jack wore in the movie.

Sally’s dress was patchworked together with a variety of fabrics even including some of the heavier textiles, ones you’d find on upholstery. Keeping it authentic as I think, Sally used anything she could get her hands on to put her dress together. After patch working the pieces and not missing ANY details, I wanted the little black stitching, sewing each one in by hand
with yarn and a quilters needle. The pieces of Sally’s dress have a variety of patterns and prints. Had to hand paint each piece with the pattern/print shown in photo.

Her legs and arms are thigh high stockings made with hand painted stitches for more of a realistic authentic look. The striped anklets were cut from a long sleeve shirt. I saved probably close to $100-$150 making up Jack and Sally on my own and had a lot of fun doing it.

Everything except for the mask, white t-short and material for Jack’s suit was bought at a second hand store. Jack’s suit material was still very cheap-$1.50/yrd at Walmart. The total I spent
on Jack and Sally was about $25. There were no patterns to follow, just lots of measuring, time and most of all imagination. 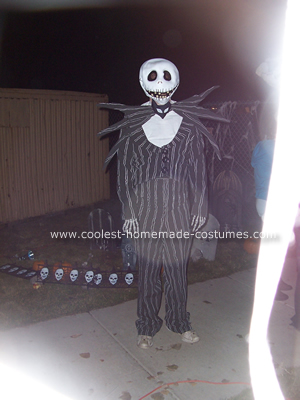 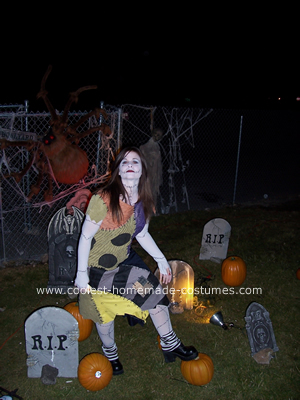 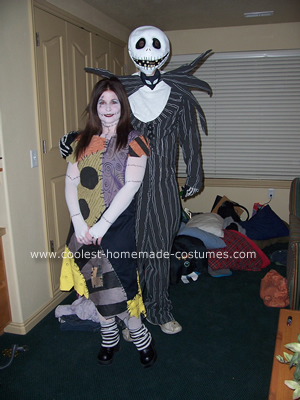 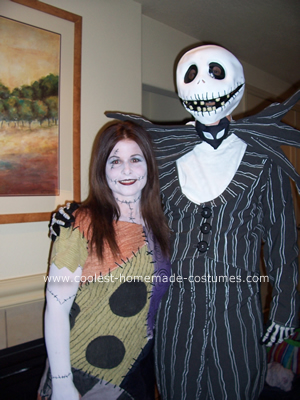