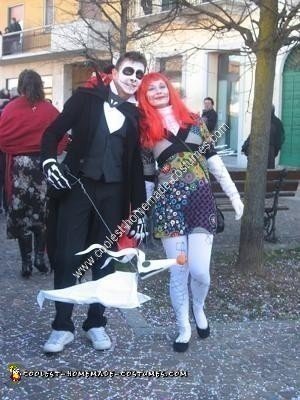 Hi, my name is Luca, I write from Milan, Italy.
Browsing the internet, I found your site which is very beautiful and full of fantastic ideas for creating costumes!! I like very much to create these things, and me and Ale, a girlfriend of mine, decided to create a couple costume of Jack & Sally from “Nightmare before Christmas” movie, for the occasion of the Carnival on 20th of February 2010.

For the head of Jack, we bought two polystyrene semisphere and we glued them together. We cut two big holes for the eyes and a segment (a quarter) of the sphere to make me able to put my head in the sphere. We put behind the holes for the eyes two pieces nylon black stockings, to make the eyes seem dark and let me see where I was going. We also drew the mouth with a black pen!

The bat bow tie was made with black cloth and card. The wings of the bat were strengthened with iron wire to make them stay up and to give them the right shape.

The Jack’s dress was a simple black dress which we attached to two tails to make it seem a tailcoat. The tails were made of the same black cloth used for the bow tie.

We created also my skeleton hands using black gloves and sewing up on them little plastics white pieces, which I cut to be similar to hand bones.

For the costume of Sally, my friend Ale, the girl, used a long haired red wig and a prone blue make-up for his face. The seams near her mouth were made with a black thread glued on her cheek with an eyelash glue. This trick made her seams very realistic!!

She was also very lucky to find in a very cheap shop a dress which looked like the Sally’s one!!
For her arms and legs, she took a white shirt with long sleeves and white stockings on which she hand sewed up the seams like Sally’s one. She used also a pair of white gloves.

Last but not least, the ghost dog Zero!!
The head of Zero was made with a polystyrene right circular cone, on which I drew the eyes and the mouth, then I glued a polystyrene little ball at the top of the cone to make the nose. I coloured it with orange tempera colour and then with a black pen I drew the eyes and mouth of an Halloween pumpkin. Its ears were made with white card in which I put some iron wire to give them the right shape.

The shape of the body was made with the same iron wire which I modeled to seem the back of a dog, and then I put on this iron wire dog skeleton a white piece of cloth that I cut from a pillow cover.

The final result of these Homemade Jack Skellington and Sally Costumes were amazing, these costumes had a lot of success, so many people and children wanted to take photos with us!! 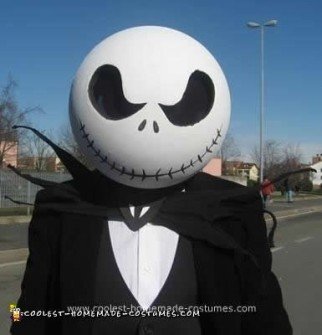 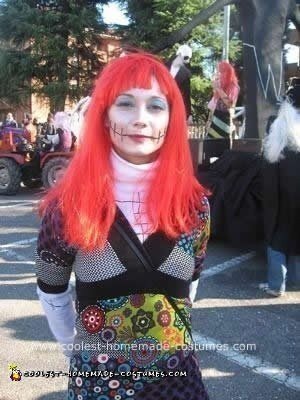 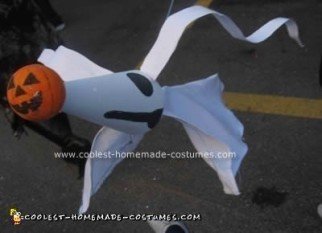