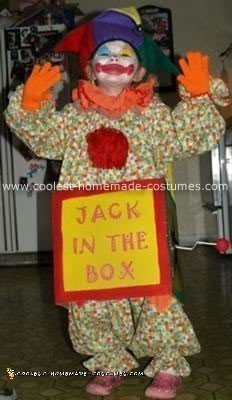 My 3 year old daughter decided back in June that she wanted to be a Jack in the box for Halloween. Halloween is her favorite time of year, I think it even tops Santa Claus! I was surprised to find out that even in September she still was asking every day if I was working on her Homemade Jack in the Box Child Halloween Costume.

I decided to start with a clown costume. Very basic jumper type with gathers on arms and legs and some ric/rac for style add some gloves and face paint and there you go. As for the box, that was the hardest part. She is so small it took me a while to find just the right size. I had made a few test runs before the final result. After picking the box I spray painted the entire box yellow. Then added some inner supports (paint stirrers fit perfectly) then spent about two days hand painting with poster paints, all the boarders, shapes, and puzzle pieces on the sides.

The letters on the front were hand cut from fonts I chose on my word program. The time cutting out all those letters was crazy but worth it! I tried and tried to get my daughter to let me put Lilly in the box on the front but she wouldn’t go for it, you know how kids are. The handle took some thinking. I used a 1 1/2 inch Styrofoam ball and painted it red, the rod was fabricated by her father with some 9-wire and bent to fit just right on the side of the box, it actually turned!

To attach the box to her I chose to use Velcro. I glued small Velcro squares all around the top edge of the box then sewed the backs to the costume. This worked very well for the local parade in our home town. For trick or treat night we added ribbon like suspenders to keep the box from pulling down on her. I must say she had a blast and loved her costume!