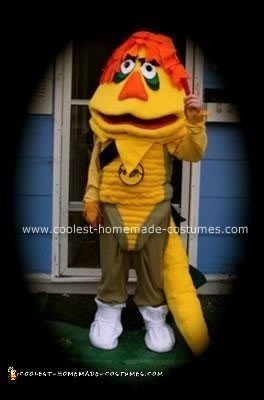 H.R. Pufnstuff; if your child doesn’t know him, he needs to! The Homemade H.R. Pufnstuff Costume was entirely made by hand with exception of pants and undershirt. Mask is made with chicken wire, paper mache and then fabric sewn on by hand. I then clipped out all the wire so his darling little face wouldn’t get torn up!

Each Halloween costume has been hand made by either myself or his dad. He’s been Jared from Labyrinth, Rubik’s cube, tin man and more. One year he desperately wanted to be a sidewalk, but to no avail!

He’s a talented musician that plays nine different instruments proficiently and is in a music conservatory. Piano is his forte and he loves to act on stage.

I hear there’s a new H.R. Pufnstuff movie in the making, my son has always been ahead of his time, even though he loves the classics!