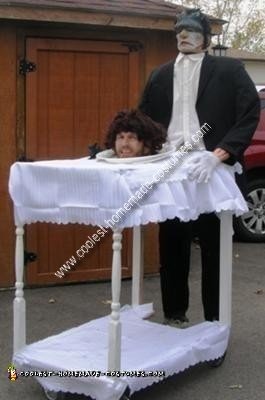 I had to come up with the best costume (like I do every year), thought of what I could do too make everyone’s head spin and I came up with this Head on Platter Optical Illusion Costume idea. After coming up with the concept I took all the measurements and I figured out how too make it so it would work a be at least moderately comfortable.

The construction isn’t so hard, you build a table with a bottom in it but the dimensions change with the person and are very complicated. Height neck length leg length torso to neck distance.

Franky is even more complicated for him too look real you must gear the torso and neck so that the head turns twice as fast as the torso and begins turning before the torso starts. The levers are in the table so we can control Franky’s movement so Frank looks at who he is talking to and moves back and forth while dancing.

Franky’s voice is just an amp, i pod and speakers in the manikins head with key phrases. The harness that hooks Franky to my daughter’s behind is a homemade contraption that just works.

After I had made it the illusion was way more than I even expected and the reaction even better. Built it all from home depot value village and a mask that I had too do a bit of latex work on too make it just right.

My daughter is in the second picture. 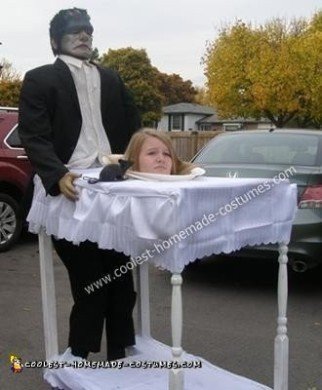 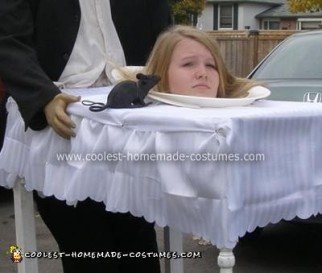