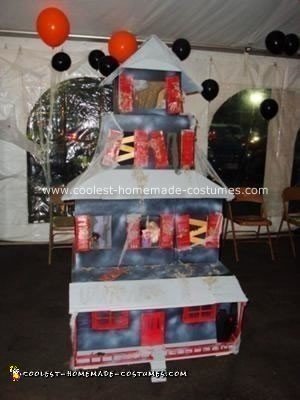 This Homemade Haunted House Costume was made by my dad, me, my mom and my brother helped a bit. It took us about a month and a half or so, and we worked on it almost everyday for a few hours. We were trying to find a good creative costume for the local costume contest and I thought it would be so cool to be a haunted house.

We used cardboard boxes for the body, all attached to each other. We cut a flap out of the boxes on the back to be a door. Inside we put cardboard shelves to hold the strobe lights and stereo for the spooky music. We cut a hole at the top for my dad’s face, which was to be painted like a zombie.

The porch was made of wainscot wood, and the coffin on the porch was made from cardboard. Hanging from a noose in one window is a bloody Barbie, and the windows have “broken glass”, which is really laminating paper cut to look like broken glass. The rats were rubber, and the bloody footprints were made by coating a ken doll’s feet in fake blood.

The house was painted with black paint and gray and red trim, to give off the feel of blood and darkness. We lightly sprayed gray spraypaint in some spots over the black to make it appear foggy and spooky. We also placed branches over the black house and sprayed the gray paint lightly over it, then took off the branches, which gave the appearance of shadows of trees. We used fake cobwebs on the house, as well as stuff used for fake flower arrangements that we draped over the house.

The shutters were made of cardboard. The windows were holes with black net-like fabric over yellow or purple fabric draped to produce a dark spooky effect when the strobe lights were on. Inside the house we used light wood to hold the house together and keep it sturdy. We made a wood base, and made the house on wheels so it could be moved easy, along with handles inside to easily move it while inside.