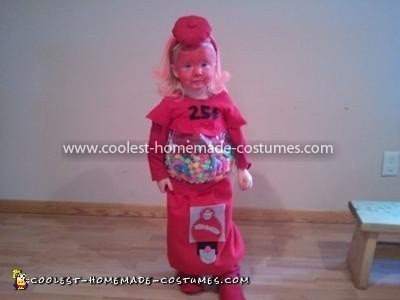 I wanted to make something that my daughter who is only 2 wouldn’t have to be inside, but would look so realistic. First I made the headband. I stuffed red felt and hot glued it to a felt covered headband. I then used more felt to make the top part of the Homemade Gumball Machine Costume.

I made arm holes, so she could move freely with it on. Then I cut aquarium tubing into 6 strips and used plastic table cloth cut into strips. I made pockets of the plastic for the tubes and then sewed the strips and tube pockets together. Then I filled them halfway with pompom (gumballs) and sewed both ends.

I made pockets on the felt to stick the tubes in and then safety pinned them to stay. I did the same with the bottom but just made a strip to cover the waistline and pin the tubes in. I made the skirt separate so it would be easy to bring her to the bathroom.

I used felt with grey and black felt for the coin mechanism. I actually used a coin and hot glued it on. I then glued a pom pom to make it look like a gumball was coming out. I used small pipe insulation around the bottom of the Homemade Gumball Machine Costume so she could walk and it wouldn’t stick to her, so you could see the coin operation clearly.

I dressed her in a long sleeved red shirt, pants and gloves. I also made shoe covers out of felt and sprayed her hair red and painted her face. She was very comfortable in it and won 1st place at our Halloween Party.