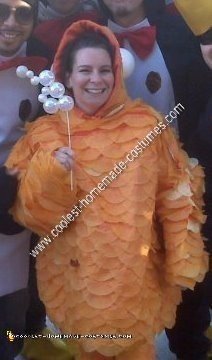 I originally saw this homemade goldfish Halloween costume idea in Woman’s Day magazine. The design was for a toddler, but it was easy enough to customize it to a larger size.

The base of the goldfish costume is a Hanes men’s 3XL orange hooded sweatshirt. I wanted it to be extra roomy, which is an understatement. It’s absolutely gigantic on me, but then again, I’m only 4’7″. But that was fine as I was planning on wearing layers underneath, since it gets very chilly in Salem, Massachusetts in October. Even so, I was still “swimming” in it. Haha! Onwards for instructions.

The scales are orange baking cups cut in half and hot-glued on in overlapping rows starting at the bottom. Every square inch of the sweatshirt was covered. There’s also a few pastel yellow and orange foil cups to break up the monotony of the regular orange cups. I lost count of how many cups I glued, but it was close to 300. Yeah, that many. After the first several rows, I was cursing myself for not doing this with fabric, since I wasn’t going to be able to wash it. But since I had already gotten this far, I forged ahead…

The eyes are a Styrofoam ball cut in half and glued onto yellow felt. The eye details were painted on with acrylics.

The fins (I only did the dorsal and the tail) are also made of felt. I used an orange Prismacolor marker to draw on the details and used glitter Mod Podge for some sparkle. I hot glued them to the sweatshirt and covered the edges with more baking cups. I reinforced the glued edges by sewing them down since part of the tail had begun to lift by the time I was ready to wear the costume. I didn’t want to risk losing it while we were wandering through the streets of Salem. If I had to do it again, I would have used embroidery floss.

The bottoms are orange leggings with a few of the baking cups glued on.

Once all the gluing was finished, I gave the entire costume a few bursts of gold glitter spray. I covered the eyes with paper towels to keep them glitter-free.

The bubbles are the ball-type Christmas ornaments that came on the holiday decorative “picks”– the ones with the tiny fake presents and pine boughs. The largest ones were already wrapped with pearlescent ribbon and was the exact effect I was looking for. The smaller ones were white, so I gave those ones a coat of glitter Mod Podge. They were all glued together with E6000, and extremely strong and smelly craft adhesive. Each ball had a hole in it, so I all had to do was thread a bamboo skewer onto the cluster of glued-together ornaments. I glitter-glued the skewer as well.

It was a tedious project and I suffered through many glue gun fingertip burns, but it was worth it. A lot of people took pictures of my goldfish costume. The guy in the picture next to me is my husband. He’s dressed as Alan from “The Hangover”. 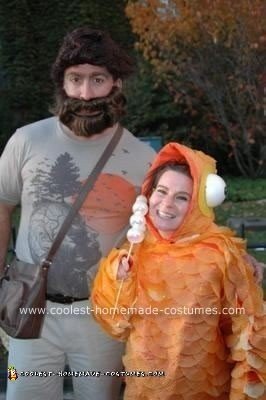