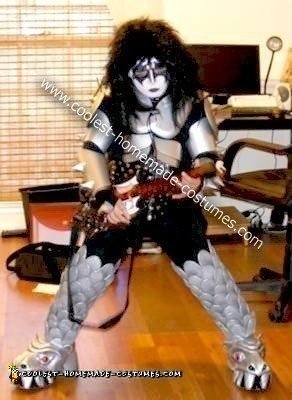 This is a Homemade Gene Simmons Halloween Costume. The armor is made from a Goodwill set of football shoulder pads and some old plastic buckets. The codpiece and bat wings were made from vinyl and ripstop nylon, respectively, and the codpiece is studded with quilter’s thumbtacks. The leg scales are stiff felt and hot glue sewed to the cutoff legs from an old pair of jeans, and the monster boots are just a pair of Goodwill platform boots with dragon head shells made from old milk jugs and papier mache.

All of this over a black long sleeve t-shirt and a pair of his Mom’s black tights. Add a studded choker from the Halloween store, a cheap black “Rocker” wig styled into the traditional Simmons topknot, and an excellent makeup job by his Mom, and that’s all she wrote.

He won first prize in the ages 8-12 costume contest in downtown Statesboro this Halloween, and has declared this the “best Halloween ever”. And that’s what it’s all about.