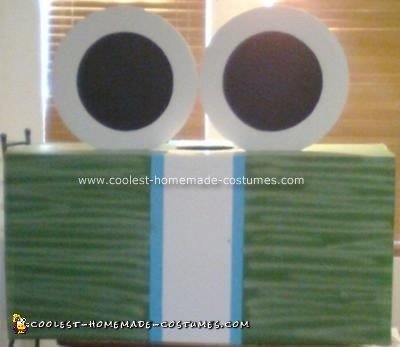 This was a Homemade Geico Money Halloween Costume I wore to a Halloween party this year where it was a major hit.

I spray-painted a box that I got at a local UPS store. Its dimensions were perfect; it is called the “guitar box” in case you go and look for one at UPS. Firstly, I used bright green spray paint, then a lighter green to make the lines look like a stack. I then made some $5 bills and glued them to the top of the box.

For the eyes, I used two large white cardboard cake holders, found at a local cake store, and glued circles cut out of black poster board to the middle of the white cake holders. I then cut small slits on the top of the box, after the paint had dried, and glue-gunned the eyes on to the top of the box. Behind the eyes, there is a hole for my head, so the costume covers from head to about mid waist.

I also carried an iPod with speakers and played the Geico music “I always feel like somebody’s watching me”. People laughed so much and took many pictures of me. The costume was so easy and cheap to make.