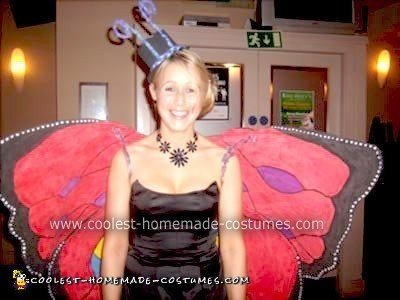 For my Halloween costume this year, I decided to be a Funky Butterfly.

I sketched out a wing design and used it as a pattern. I took a normal cotton sheet and cut out the wing shapes, allowing four pieces for the top halves and four for the bottom halves.

I then separated the wings into four sections, attaching two pieces back to back for each section.

I straightened out wire coat hangers, bent them into the shape of each section of wing and inserted them inside the wing, sealing up the ends. I found pliers worked well to help get the desired shape. I then attached the bottom halves to the top halves of the wings, which left me with two separate sides.

I used regular poster paint, as I knew I wouldn’t be out in the rain, but fabric paint can also be used. The paint does take some time to dry, but a hair dryer will speed up the process. I found that the poster paint works well because it dries hard and adds extra strength to the wings.

Once the wings where dry, I attached both sides together in the middle and also attached some pretty elasticated ribbon to each wing for straps; these can be seen in the pictures. All attachments were done with thread in visible areas; where they were hidden, I used darning thread for extra strength.

I made the hat out of a cereal box and winged it without using a template. I cut out a circle for the top, leaving some room around the edge to make tabs which would attach to a long strip for the mid section. I did the same with the rim, cutting a bigger circle and making tabs from the middle up into the cylinder.

I then just took a nice black dress, some floral jewelery and a funky pair of purple shoes to tie it all together.

This Homemade Funky Butterfly Halloween Costume worked out quite well and held together all night!